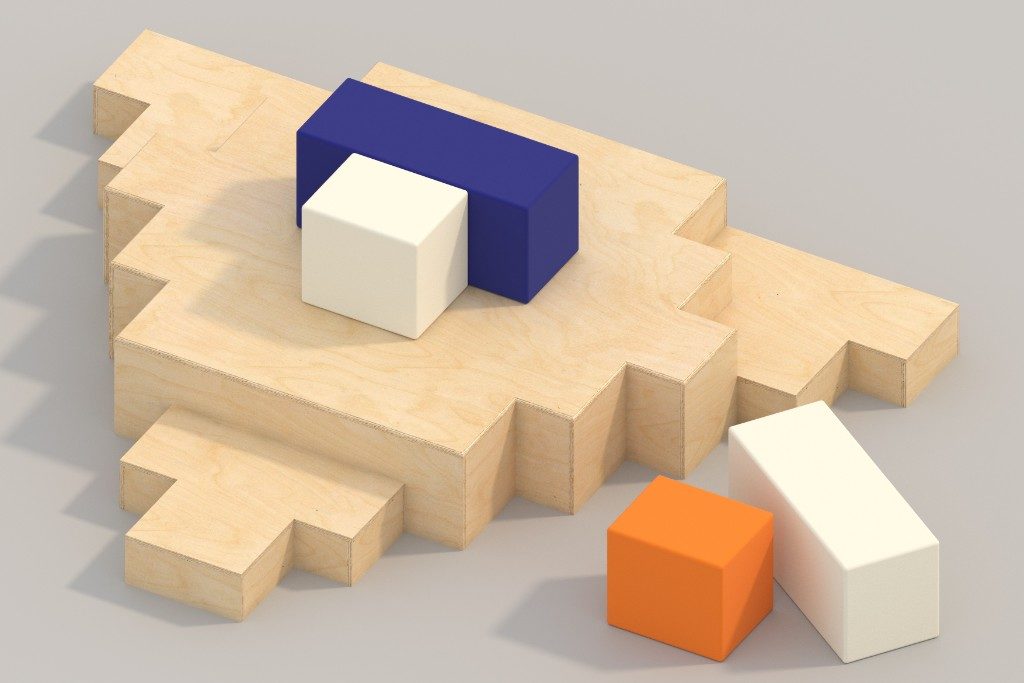 A series of conversations on sustainability, body and art in design, architecture and urban planning

Francis Kéré’s design for the Talks Theatre, titled Tugunora, will provide the ideal environment for this year’s Talks program, blending inspiration from the ancient Greek agora, a public space for assembly and discussion, and the Burkinabè tuguna, the traditional gathering space in West African villages, where the elders come together to consult on important matters of the community. While the agora is an open space, the tuguna is often built from a round log structure which carries a roof of woven leaves. Kéré integrated both characteristics in the Talks Theatre which is designed as a landscape that consists of several modular, wooden seating elements of different heights, surrounding the speaker’s podium which is covered by a canopy of honeycomb lamps. Combining the elder’s practice with the public assembly aspect of the agora, the Talks Theatre is designed as an environment for exchange and of dialogue, a place that generates knowledge and fosters the current discourse on design. The Haas Brothers
Artists
Nikolai and Simon Haas were born in Austin, Texas in 1984, and currently live and work in Los Angeles. Their collaborative projects exist at the intersection of art and design, often incorporating nature, fantasy, psychedelia, and humour. Their work has been included in exhibitions including the Cooper Hewitt Design Triennial, the San Jose Museum of Art, and is the subject of upcoming survey at the Bass Museum of Art.

Mollie Dent-Brocklehurst
Founding Partner, FuturePace
Mollie Dent-Brocklehurst was the President of Pace London (2012–2017), and has been with the gallery since 2010. From 1997 to 1999 she was a Director at Gagosian Gallery, New York, and from 1999 to 2004, she was Managing Director of Gagosian’s London location. Prior to joining Pace London, Mollie was the International Director and Programme Coordinator for The Garage Centre for Contemporary Culture, Moscow.

Simon de Pury
Art Auctioneer and Co-Founder and Partner of de Pury de Pury and de-Pury.com
Simon de Pury is one of the leading figures in the art market. He is renowned for his longstanding knowledge of the global marketplace and for his performance on the auction podium. At the beginning of 2013 Simon founded, together with his wife Michaela, de Pury de Pury. In 2015, together with Arnaud Massenet, and Michaela de Pury, he founded de-Pury.com, an online platform for contemporary culture and auctions of contemporary art.

Studio Drift
Artists
Lonneke Gordijn and Ralph Nauta founded Studio Drift in 2007. Their focus is creating multi-disciplinary site-specific interactive installations, sculptures, objects and films, which propose a distinct mix between the latest science fiction inspired hi-tech developments and their poetic imagery. Their work explores existing and new relationships between nature, technology and mankind, are in the collections of the V&A Museum in London, the San Francisco MoMA, the Louis Vuitton Foundation, The Rijksmuseum, and the Stedelijk Museum.

Torkwase Dyson
Artist
Torkwase Dyson is an artist who uses geometric abstraction to consider environmental issues today. Dyson has exhibited at the Studio Museum in Harlem, the Whitney Museum of American Art, Museum of Modern Art, Graham Foundation, and the Smithsonian National Museum of African Art. Dyson has been awarded the Nancy Graves Grant, Joan Mitchell Grant and the Lunder Institute of American Art Fellowship. Dyson is based in New York and is currently visiting critic at Yale School of Art.

Sara Faraj
Secretary of the Therme Art Advisory Board
Sara Faraj studied psychology in Warsaw and Art Management in New York and worked for a UAE based Art Fund. In 2017, Faraj joined the Therme Art team and helped to create the International Advisory Board. She serves on the board as a member and has been its Secretary since the beginning of 2018.

Marc Glimcher
President and CEO of Pace Gallery
Under his leadership, Pace has greatly expanded the scope of its artist representation, adding major international contemporary artists as well as prominent artist estates to its roster­. Glimcher has also spearheaded Pace’s geographic expansion—opening galleries in London, Palo Alto, Hong Kong, Beijing, Seoul, and Geneva over the last decade. Currently, he is overseeing the design and construction of Pace’s new flagship gallery in New York’s Chelsea neighbourhood, anticipated to open in Fall 2019.

Robert C. Hanea
Founder, President and Chairman of the Board, Therme Group
Dr. Robert C. Hanea is the Co-Founder, Chairman and CEO of Therme Group, a leading global technology company and integrator of wellness and entertainment concepts focused on revolutionising the wellbeing industry. Dr. Hanea serves on the boards of several investment companies, architecture, and law practices. He holds a Degree of Doctor of Law (Juris Doctor), and is an active philanthropist with a history of supporting education, science, and the arts. Dr. Hanea currently maintains positions as co-chair of the board of various foundations dedicated to education and medical support programs.

Arthur Jafa
Artist
Arthur Jafa is an artist, filmmaker and cinematographer. Across three decades, Jafa has developed a dynamic practice comprising films, artefacts and happenings that reference and question the universal and specific articulations of Black being. Underscoring the many facets of Jafa’s practice is a recurring question: how can visual media, such as objects, static and moving images, transmit the equivalent ‘power, beauty and alienation’ embedded within forms of Black music in US culture?

Francis Kéré
Founder and Lead Architect of Kéré Architecture
Francis Kéré’s architectural practice has been recognized nationally and internationally with awards including the Aga Khan Award for Architecture (2004) for his first building, a primary school in Gando, Burkina Faso, and the Global Holcim Award 2012 Gold. He has developed innovative construction strategies that combine traditional building techniques and materials with modern engineering methods. Kéré’s work has recently been the subject of solo exhibitions at the Architekturmuseum in Munich and the Philadelphia Museum of Art (both in 2016). In 2017 the Serpentine Galleries commissioned him to design the Serpentine Pavilion in London.

Roth (Eduardo Neira)
CEO and Founder of AZULIK and President of the Foundation Enchanting Transformation
Integrating hospitality, gastronomy, wellness, architecture, sustainability, design, art, fashion, and luxury, Roth’s innovative projects reconnect individuals and tribes, both ancient and contemporary, with their essence and with nature. He is currently developing a trans-disciplinary site in the jungle of Tulum in the Yucatan peninsula encompassing an array of creative spaces, including an arts and crafts school for the local Mayan population which will serve as a template for a network of schools across the Americas.

Hans Ulrich Obrist
Artistic Director, Serpentine Galleries
Hans Ulrich Obrist is Artistic Director of the Serpentine Galleries, London. Prior to this, he was the Curator of the Musée d’Art Moderne de la Ville de Paris. Since his first show “World Soup” (The Kitchen Show) in 1991, he has curated more than 300 shows. Obrist’s recent publications include Mondialité, Conversations in Colombia, Ways of Curating, The Age of Earthquakes (with Douglas Coupland and Shumon Basar), and Lives of The Artists, Lives of The Architects.

Claudia Paetzold
Art Advisor and Artistic Director at Ik Lab
A graduate of the Sorbonne, Harvard and Christie’s Education, Paetzold has been an art advisor for more than ten years, building private collections and foundations and acting as a VIP consultant for Art Basel. She focuses on art as a catalyst for awareness and evolution. As the artistic director of IK LAB in Tulum, she is developing original concepts which integrate contemporary art, ancestral knowledge, technological innovation and applied sustainability and culminate in new ways of creating and experiencing art.

Mikolaj Sekutowicz
Partner & Vice President of Therme Group Curator of Therme Art
Mikolaj Sekutowicz is Partner and Vice President of Therme Group, a leading global technology company and integrator of wellness and entertainment concepts focused on revolutionizing the wellbeing industry. Responsible for the global rollout Mikolaj initiated the Therme Art, and serves as its curator. Being a lawyer and management professional his whole career, Mikolaj was also founding director of TRAFO Center for Contemporary Art and publisher of art related books.

Studio Swine
Art Collective
Studio Swine was established in 2011 by Alexander Groves and Azusa Murakami. Their work straddles the spheres of sculpture, installations and film, blending poetry and research into immersive experiences. Professional training in art and architecture allows the studio to bridge rich and emotional narratives with rigorous technical and spatial awareness. Their work has been widely exhibited including at the V&A Museum, Pompidou Centre, and the Venice Art and Architecture Biennales.